The N1 Casino is one of the youngest online casino providers and is starting with an offer that already includes a whole range of slot machines, live tables and progressive jackpots. In my test I tested the range of games for you, tried myself in the live casino and gained experience with the bonus conditions, the payout rates and the betting limits. I also took a close look at the security and player protection of the young online casino provider.

* T&Cs apply to all offers, click 'Play Now' for more details on each bonus

In my N1 Casino review, I will first introduce you to the individual game categories and present you with a small selection. I will then present you with further details such as the bonus program, terms and conditions or the mobile app in separate test reports.

My N1 Casino experiences with the range of games

The number and quality of games are important factors in this review. But in order to be able to evaluate everything correctly, you should always go into the following points: the payout rates of the individual games, the amount of the stakes and also the betting limits. Only then can you correctly classify the selection of games and make your assessment.

The range of games in numbers
In any case, one thing comes out first when looking at the bare numbers: The online casino is the right place for players who like a large number of slot machines and progressive jackpots. More than 1,700 games are a real challenge to the competition. At the time of my N1 Casino review, there were 163 progressive jackpots to choose from, such as Divine Fortune, Mega Moolah, or Platton Wild Progressive. Well-known manufacturers such as NetEnt, Play'n GO, Microgaming or Evolution Gaming are all represented.

In addition to the slot machines and the progressive jackpots, the casino has other highlights in its program. There are 27 video poker variants, including Poker Pursuit from the British software developer iSoftBet or MultiWin from Amatic, a manufacturer from Rutzenmoos near Salzburg, Austria. As for the table games, Craps and Mahjong Exchange immediately caught my eye. But I wasn't really impressed by this selection because I missed other classics from the scratch card and arcade games area like Max Damage and the Alien Attack from Microgaming or Hole in One from Play'n GO. Anyone who is particularly interested in craps will find further information in my separate test report.

The N1 Live Casino
When selecting the cooperation partners in the live area, they mainly rely on Evolution Gaming. 36 tables come from the market leader, which operates its live casino production for the European market in the Latvian capital Riga. Of course, the online casino operator can decide for himself which games to include in his portfolio. In the case of this live casino, there are ten roulette variants, ten blackjack and four baccarat versions and some other attractive games like Football Studio or Dragon Tiger. Six other tables from the supplier Ezugi round off the excellent portfolio and that's why I give it full marks. You can find more information about the live offer in my separate N1 Live Casino test report.

The N1 Casino app
According to my N1 Casino experience, this online casino provider is also a mobile pleasure. You can play browser-based on all devices. The mobile app includes almost all games on the web and is just as user-friendly and secure as the web version. The advantages of this app are obvious. A download is not necessary and you are not tied to specific end devices or operating systems. You can get more information about the range of games, the technical requirements and the functionality of the mobile version in my detailed test report on the N1 Casino App.

Overview of the betting limits
The adventure starts with as little as €0.01 on numerous slot machines. Video poker and arcade games only cost €0.10 per game and you can play roulette for €0.25. In the scratch card games and almost all other table games, the minimum requirement for a game participation is €0.50, with blackjack it only starts from €1.

The upper limits are set relatively quickly compared to the competition. Only with roulette can you risk a lot with a maximum bet limit of €5,000 and win a lot accordingly. A maximum of €1,000 can be wagered on the table games. In all other categories, bets of a maximum of €100 or even just €50 are possible. Players who like to take a lot of risks and therefore calculate the chances of success for high profits only have a few opportunities here.

In addition to the betting limits, you are probably also interested in the payout ratios. The operator has no slip ups or downs here and is in the good average compared to the casino experience of the best providers with an overall RTP value of 96.00%. The video poker games have consistently small ranges between the lowest and highest RTP value per game. As always, there are bigger differences between blackjack and slot machines.

*Arcade games are not offered.

So it is noticeable that this online casino does not allow itself a lapse despite its large selection of games and always pays attention to the RTP values when looking for new games. Of course, it also happens that the average payout rates sometimes slip up, such as with scratch cards at 90.72%. But the number of games in this category is limited and therefore it is not important for my N1 Casino rating.

Technically, there is nothing wrong with the website and the software. Everything works great and for an online casino that has only just started, my N1 Casino experience has been quite remarkable. The website also scores points in terms of design and menu navigation. Attention was paid here to the best possible usability.

On the top menu bar you will find not only the range of games, but also direct access to the bonus program, your payment transactions and the current campaign for loyal customers. In addition to the German version, the website is also available in English, Finnish, Swedish and Russian.

The company behind the casino

N1 Interactive Ltd. is based in Malta and holds the Malta Gaming Authority gaming license number MGA/B2C/394/2017. In addition to the N1 Casino, it operates other well-known online casinos with the Bob Casino, the Paradise Casino and the Lavadome.

The company profile
The casino entered the race in spring 2018 and announced its goal with the name N1, i.e. number 1: as quickly as possible in the fast lane without pit stops and then triumph on the home stretch. That all sounds very ambitious and accordingly the company will have to be measured against the best attributes for a very good online casino.

The customer service
The German customer service is available around the clock. Inquiries can be made either in live chat or via an email address. There is no telephone hotline. With eight questions and answers, the FAQ area is very poor compared to many other providers. Above all, the answers about security and player protection are missing. There is a separate subpage for the protection of the players, but only in English. If the casino pulls together the most important information they have hidden in various sections of the website on various menu items, the customer service could get more than six points from me.

Security and Licenses
As mentioned above, the casino holds a Maltese gaming license and also states that all NetEnt games are also licensed by the Malta Gaming Authority (MGA). All other games are licensed and regulated by the Curaçao government. Thus, the online casino provider has a high security standard, which is further strengthened by the cooperation with the player protection organizations GamCare, Gambling Therapy, GamblersAnonymous and Responsible Gaming.

Data is transmitted with a secure 128bit SSL encryption and protected by the well-known cyber protection company COMODO. Fraud can therefore be ruled out in any case.

I have had good N1 Casino experiences and this is also reflected in the bonus points. Of course, the still very young casino hasn't won any prizes so far, but it met my expectations in almost every other category. There are also full points for the numerous additional offers and the loyalty program, as with the special games. More than 160 progressive jackpots speak for themselves. Can the online casino have the hoped-for success with this tactic and become number 1? We will see.

In any case, the extensive and very attractive promotion bonus code offer is also worth mentioning. Here already registered players receive special bonuses without deposit, if they enter appropriate promo codes. On Mondays, the reload bonus comes with 30 free spins. With the so-called "Friday Route" there are even 75 free spins when redeeming a promo code if the general bonus conditions are met. In my detailed test of the bonus program you will get even more information.

My conclusion to the N1 Casino

The N1 Casino test is very positive. The still very young casino not only impresses with a large selection of games, but also with the quality of the games. The live casino leaves nothing to be desired and the selection of more than 160 progressive jackpots is impressive. The mobile version with more than 1,000 games is also convincing and security is also taken care of in this casino. While the three deposit welcome bonus isn't as attractive as the competition, the loyalty program and promotions make up for it.

Of course, the newcomer also has small creases that he has to iron out. For one thing, customer service isn't the icing on the cake yet. It shouldn't be that as a player and thus also as a customer, you have to collect the important questions about security, player protection or payment modalities. The FAQ area is expandable. The fact that PayPal is not offered as a payment method is another small minus point. If you don't want to play in online casinos without PayPal, I recommend you my page about the best PayPal casinos.

The betting limits of the most important casino games (without live games):

In the last analysis, the payout rates for all games were a very good 96%. 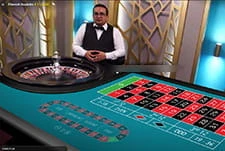 More than 30 live dealer tables from Evolution Gaming and Ezugi can be played. 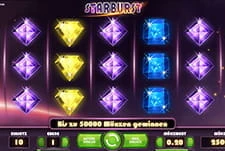 In the bonus program there are only free spins on the Science Fiction slot machine Starburst. 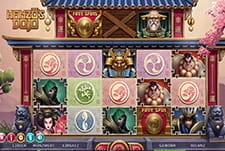 Japanese adventure Hanzo's Dojo is just one of over 1,700 slot games on offer.

Safety and fair play are regularly guaranteed by different authorities.

The casino holds a valid gaming license from the Malta Gaming Authority (MGA).